David Ramseur was press secretary to Alaska Gov. Steve Cowper on a 1989 trade mission across the Soviet Far East. 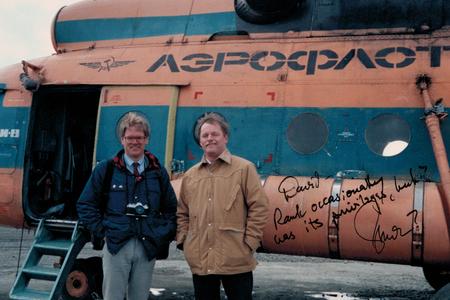 Ramseur visits the make-shift memorial to Russia dissident leader Boris Nemtsov, assassinated in here in February 2015. Ramseur served as a volunteer media advisor to Nemtsov when he was governor of Nizhny Novgorod, USSR, in 1993. 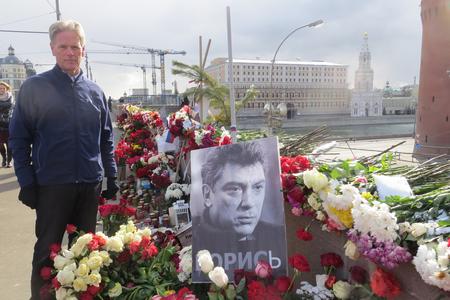 The anti-Putin protests underway in the Russian Far East city of Khabarovsk in the summer of 2020 have implications for future Alaska and US-Russia relations, which inspired this column in the Anchorage Daily News. I last visited Khabarovsk two years ago on my Russian book tour where I had my largest audience of local residents enthusiastic about any renewal in Alaska-Russia relations.

I was honored to be a source for a compelling story about how a Cold War military plane crash has recently emerged from a melting Alaska glacier, and the return to the Cold War mentality between the US and Russia.

1980s rock & roller Eddie Money played a little-known role in melting the Alaska-Russia "Ice Curtain" when he performed with the Soviet Union's most popular rock band in Alaska in 1988. Here's David's remembrance of that event on the occasion of Money's 2019 death.

In July 2018, David was invited by the US Embassy in Russia on a two-week, six-city book tour across the Russian Far East to discuss his book and distribute the Russian language version. Here's his account of that trip in Alaska's largest newspaper:

3 decades ago, Alaskans helped end the Cold War on 'Friendship Flight' to USSR

The 30th anniversary of the historic 1988 Friendship Flight between Nome and Provideniya, USSR was the subject of a guest column by David in the Anchorage Daily News.

David argues that the Spring 2018 diplomatic tit-for-tat actions by the US and Russia set back overall relations between the countries which should instead look to Alaska for a successful model of citizen diplomacy: Forced closing of Russia's Seattle consulate will set back U.S.-Russia relations.

I'm honored to have an essay about the theme of my book on Alaska-Russia relations published by a national magazine, Zócalo Public Square. Affiliated with Arizona State University and the Smithsonian, Zócalo’s content goes to 290 media outlets worldwide.

Alaska has lessons for Trump in working with Russia
Nov. 19, 2016; Alaska Dispatch News

The Tin God Behind the Ice Curtain

Easier Native travel between Alaska and Russia is a thaw and an opportunity
July 31, 2015; Alaska Dispatch News

It's time to drop policies of the past, lift Cuba restrictions
August 14, 2009; Anchorage Daily News